As 2014 closes out I am thrilled to offer a final reflection on my All Clean in 2014 series that began last January. It’s hard to believe a year has gone by, but I accomplished a lot. More importantly, I learned a lot:

Setting a house cleaning goal is important. Goals address legitimate needs in our lives, so even though it might feel scary, goal setting at the start of a calendar year is a positive, courageous step toward meeting real needs.  As the old adage goes, “If you aim at nothing you’ll hit it every time.”  I’m glad I decided to clean one room per month for a year because my house needed it. And even though each room didn’t get all of the attention it needed, each room did get some attention. So I consider that a success.

A clean heart is more important: My desire to clean was going well until April when I really needed to address some issues in my marriage and at work. That meant putting aside blogging and ministry because I wanted to pour my heart, energy and prayer into what matters most. I am glad I stopped blogging for a season. Hopefully it inspired you to think about your own priorities.

I accomplished more when I wasn’t blogging. I loved including others into my cleaning projects, and so many of you expressed how much you enjoyed following along. But it took way more time to narrate my efforts in words and pictures than it took just doing it without sharing.

Definitions Matter: As I began to feel guilty about how slowly my projects were going, I realized I needed descriptions to support my action plan and to squash the guilt. Here’s my glossary with an example to follow.

Example: The kitchen and the bathrooms stand out as two areas of every home that need to be cleaned, organized, and maintained regularly. How often each of us gets to them will vary, depending on our life’s season. I certainly kept up with these areas when I was a full time homemaker and the children had chore charts. Now, I go through various phases of maintenance and trying.

I asked my girls what area of the house they feel is most neglected and the kitchen rose to the top. This is actually sad because we don’t cook that much. But when we do, it’s usually holidays or major school breaks and we’re cooking for 10-12 people over the course of several days and weeks. I don’t follow up these times with a cleaning plan and have filthy oven burners to prove it. I would like to work on this during 2015. For example, I think I may hire someone to come in and deep clean the kitchen twice a year to make it easier for me to maintain.

Life Happens: Along with the interruptions caused by marriage and work came a major flood in our basement due to plumbing work happening outside. Our basement has five rooms and four closets and nearly everything in all of those spaces had to be moved in order to rip out the carpet. The basement was on my list of places to clean in 2014, but the timing of the flood forced me to focus there sooner.

It took quite a while to finish cleaning and organizing that space because Erica and Will lived down there for 3 months. Their German Shepherd had already been with us for nearly a year and his hair and footprints forced me to hire a professional cleaning lady. Carrie moved back home, along with her stuff from college. Cynthia moved back in, after graduating from boarding school.  Erica and Will moved out, taking with them a bed and a dresser. Then Andrea got married, adding a bed and some other items that haven’t even been dropped off yet.

Maybe you’ve experienced something similar walking through trials of every sort. Our goals do have to give way to whatever God allows in our lives.

Since Erica and Will took the dresser/desk pictured below, I had to adapt my office/kitchen, which started out last January like this:

I moved a desk from the flooded basement to replace the dresser and by maintaining it once a week, I am able to get it to look like this: 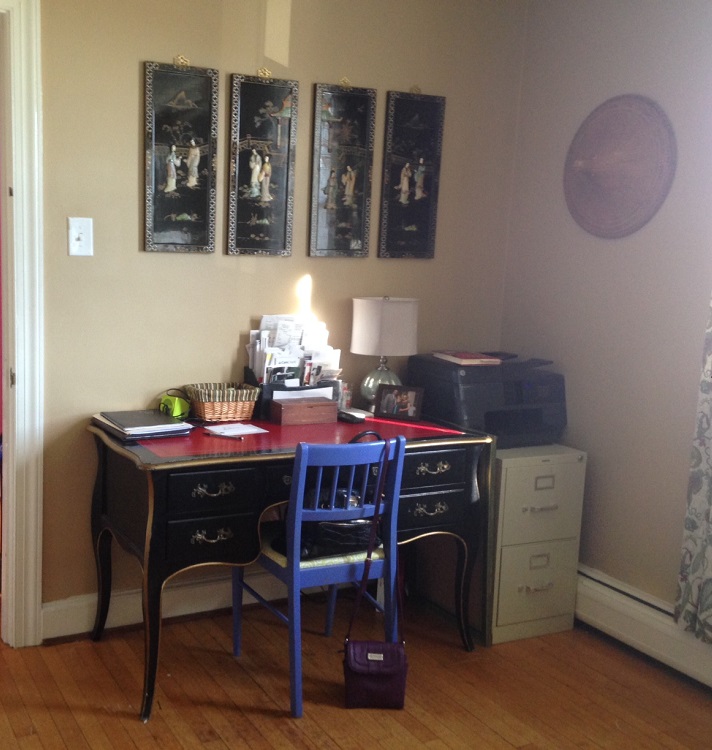 But during the week, I don’t even try. So it looks like this:

And remember those drawers I organized so well?: 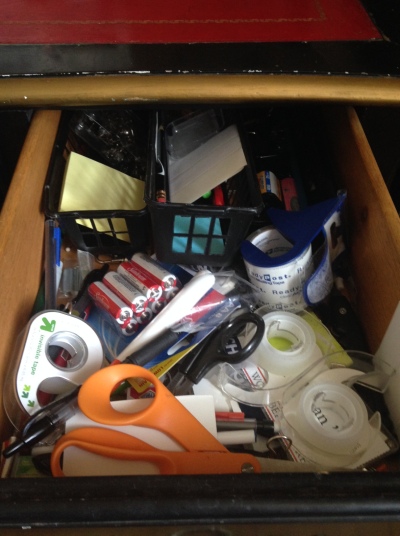 What a lesson in the endless cycle called keeping house!

All in all, I feel good about what I accomplished in 2014. Setting the initial goal kept me motivated and I became more maintenance-minded. As I worked through each room of my house, I had to make a decision about whether it needed cleaning, organizing or both. Then throughout the year, I had to accept it when I wasn’t keeping up, and instead find satisfaction by trying. The flood was a blessing because we dejunked a space that is easy for me to neglect. We even purchased new furniture for the family room, and now Joe has a great man cave that’s easy to maintain.

I hope these examples provide perspective as you develop your own cleaning/organizing/maintaining strategies. Be careful not to compare yourself to me or your friends. Each of us has to develop a glossary of our own, try to avoid being outright neglectful, and keep a clean heart above all else.

For more tips on keeping up with and maintaining your home, check out flylady.net.