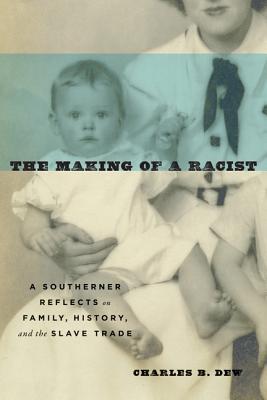 I recently read a book written by historian Charles Dew entitled The Making of a Racist. Born in 1937, Dew grew up in Florida and he describes how the Jim Crow South shaped his young mind. Dew says he learned more through osmosis than through verbal instruction, but his parents’ behaviors, along with community narratives venerating the South, all summed up to a simple prevailing belief: “colored folks are inferior.”

It wasn’t until his college years that Dew began to question what he had been taught as a boy. At Williams in Massachusetts, black students were his peers. Back home, Southerners were fighting desegregation with a rage that disgusted him.

One summer break, a beloved uncle admitted he felt pressured to align with a white supremacist group. This troubled Charles deeply.

Finally, a history seminar on the Old South enabled Dew to think objectively about slavery and the Confederacy. It took four years, but Charles Dew broke free from what he described as “that reptilian skin of racism that had wrapped itself around me as a white southerner.”

There are a few key parallels  between my own story of bias and that of Charles Dew, and these points may be helpful  as you examine the stereotypes you hold:

Overcoming bias takes time: It took four years for Dew to change his mind about blacks. It took 12 weeks for me to change my mind about police. While anti-bias training is an absolute essential in every profession, a day of training is just the beginning of seeing our bias. Even if we can’t take a class, we can choose to replace childhood myths with facts by reading books. It’s what adults do.

To overcome bias, we have to detach ourselves from what our parents taught us. All parents have a way of communicating to their children that certain groups of people are evil or inferior. Identify the conversations or warnings your parents conveyed. Who were the targets of their disgust or fear, and what is your mindset toward those groups now? It may not be race-based bias. You may despise men, Muslims, or gays.

To overcome bias, we have to move toward those we scorn.  Charles Dew acknowledges that leaving the South was essential to his awakening. Similarly, getting out of my head and into a police precinct was monumental in reshaping my mind about police. Perform this test: Make a list of your 20 dearest friends or people you would enjoy taking with your family on a week-long vacation. If all of them share your race, religion, socioeconomic status,  political affiliation, or sexual orientation, your world may simply be too small. When we befriend more people, our biases diminish.

I found that to be true at the police department. With only one exception,  all of the officers were warm, professional, knowledgeable, and committed to fairness. I had made the exceptions the rule, and I know it’s hard not to do that. We do encounter people who support the stereotypes or caricatures we hold against them. But when those exceptions dominate our media sources and dinner-table conversation, we are passing on to a new generation the biases that lead to hate.

In his reflection on the killing of two deputies last week, the sheriff of Gilchrist County Florida said, “What do you expect happens when you demonize law enforcement to the extent that it’s been demonized? Every type of hate, every type of put down that you can think of.”

Read his quote again and replace “law enforcement” with “black men” and the statement is equally true.

The only way to reverse this sad irony is for each of us to shed our reptilian skin. It begins with identifying and repenting of the narratives fed to us by our parents, the stereotypes that demonize people.

Mature Christians know that the real reptile is Satan, the real demons are of a spiritual sort, and those demons rejoice when we refuse to grow up.

It’s like this: when I was a child I spoke and thought and reasoned as a child does. But when I became a man my thoughts grew far beyond those of my childhood, and now I have put away the childish things.

Seeing our Bias Part I