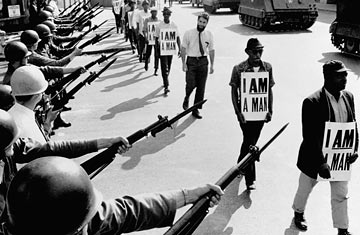 By the time I hit double digits in 1973, Martin Luther King, Jr. had been assassinated in Memphis after men carried these signs.

I invited you to consider why black men felt the need to carry such a sign, and the answer is very simple: Because the white guy didn’t have to. Whites enjoyed the freedom to live out their personal aspirations in America while blacks were dehumanized for centuries.

Consider this early version of “black-on-black crime,” mandated by slave owners to make an example of rebellious or runaway slaves:

After the Civil War, freed slaves were given nothing upon which to build their lives, and at any time, they could be treated like this:

When blacks built wealth, whites tore it down:

When black kids tried to integrate schools, white kids carried posters like these:

And of course when blacks tried to protest all of this ill treatment, even law enforcement treated them brutally:

It is these images of police contributing to the humiliation of black people that stoked my dad’s distrust of police, and he certainly narrated that distrust to my brothers and me during the 1970s. Police brutality was so understood as a common occurrence in the black community, that comedian Richard Pryor included it in his act, pointing out that whites were clueless about it:

While the use of the n-word for comedy has faded from use, the choke hold made the spotlight when Eric Garner was killed by police in Staten Island in 2014. There is nothing funny about this:

I find no joy in posting these photos, but I am convinced that the reason slavery and Jim Crow lasted so long is because Christians turned their eyes away from innocent black men dying. Decade after decade, moms, dads, grandparents, pastors, and politicians justified racial terror in spite of God’s call to love our neighbors as ourselves. They bequeathed to their children the kind of contempt for black people that leads to this:

Lives lost and persistent humiliation and scorn from others prompts people to carry posters like these:

Black Lives Matter,  I Am a Man, I Can’t Breathe are all bold declarations of human worth that align with our Christian belief that every person is an image bearer of God. Unfortunately, throughout American history, the church at large and individual Christians tolerated a nation in which black people have been terrorized, marginalized, and feared.

Black Christians like me want to boldly address these issues even as we enjoy strong, loving friendships in white congregations. We know ours is not the only pain in the church. We just want our white friends and pastors to understand how history shapes what is happening in our communities now. We believe in forgiveness! We know Satan is ultimately responsible for division and war. But if more of us – black and white Christians together – were willing to address hatred with boldness, we would be the lights of love and reconciliation the world so desperately needs.

Author Jim Wallis puts it this way, “In my experience the motivation of black friends and colleagues isn’t to make white people feel guilty, to beat us up over our racial history, or to just complain about it. What I hear is deep concern for their children and for their future, and the reasonable expectation that white people not defend themselves from the past, but rather join efforts to build a better multiracial future.”*

Peter fairly exploded with his good news: “It’s God’s own truth, nothing could be plainer: God plays no favorites! It makes no difference who you are or where you’re from—if you want God and are ready to do as he says, the door is open. The Message he sent to the children of Israel—that through Jesus Christ everything is being put together again—well, he’s doing it everywhere, among everyone. – Acts 10.34-36 (MSG)

One thought on “My Black History: Images”